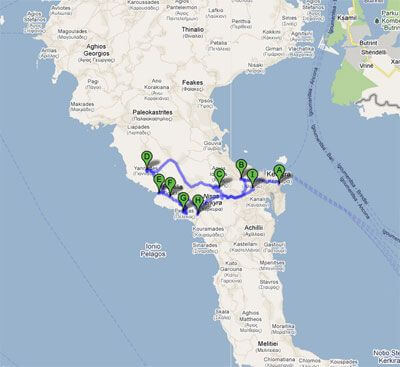 Tours of the beautiful island of Corfu will have its main town as  starting point. The good road network makes the most important sites, and some of the most characteristic villages easily accessible, whether you choose to rent a car, or follow an organised tour, or get the local KTEL bus.

As we leave the town and take  a northwesterly direction, we pass the attractive traditional village of Potamos with its multicoloured houses, and continue towards the area known as Livadi tou Ropa or Ropa valley, one of the most fertile parts of the island. Here is situated Corfu’s golf course.

Not far are the rural settlements of Kanakades, Marmaro and Giannades. Further south lies Ermones (16 kms west of the town), a small bay with a sandy beach between imposing rocks and wooded hills. According to one theory, this is where the legendary meeting of Odysseus with the Phaeacian princess Nausica took place. This was also the favourite beach of the poet Lorentzos Mavilis who, it is said, used to seek inspiration here, when writing his sonnets. In this area traces of habitation have been found which have been dated to the Bronze Age.

South of Ermones there are another two superb beaches: Myrtiotissa and Glyfada. Myrtiotissa is reached on foot from a branch in the road between Vatos and Pelekas. It owes its name to an icon of the Virgin which was found by a little shepherd girl among the myrtle bushes in die area. The monastery of the same name which stands on the site today, was built 700 years ago, as tradition has it, by a Turkish monk who became a Christian. Myrtiotissa is an isolated beach set in impressive scenery, among lush verdure, and with a sea which is marvellous for swimming.

Glyfada (16 kms southwest of the town) is a long sandy beach at the foot of the Pelekas mountain.

We offer free of charge unlimited mileage. Drive safe and enjoy your holidays.

We offer free pick up & drop off in Corfu Airport

We also offer totally free:
– 24hr Assistance Hotline. If you need any assistance just call us any time. We will be glad to assist you.

Our prices include all taxes & VAT. No hidden costs

The 2nd additional driver is free of charge.